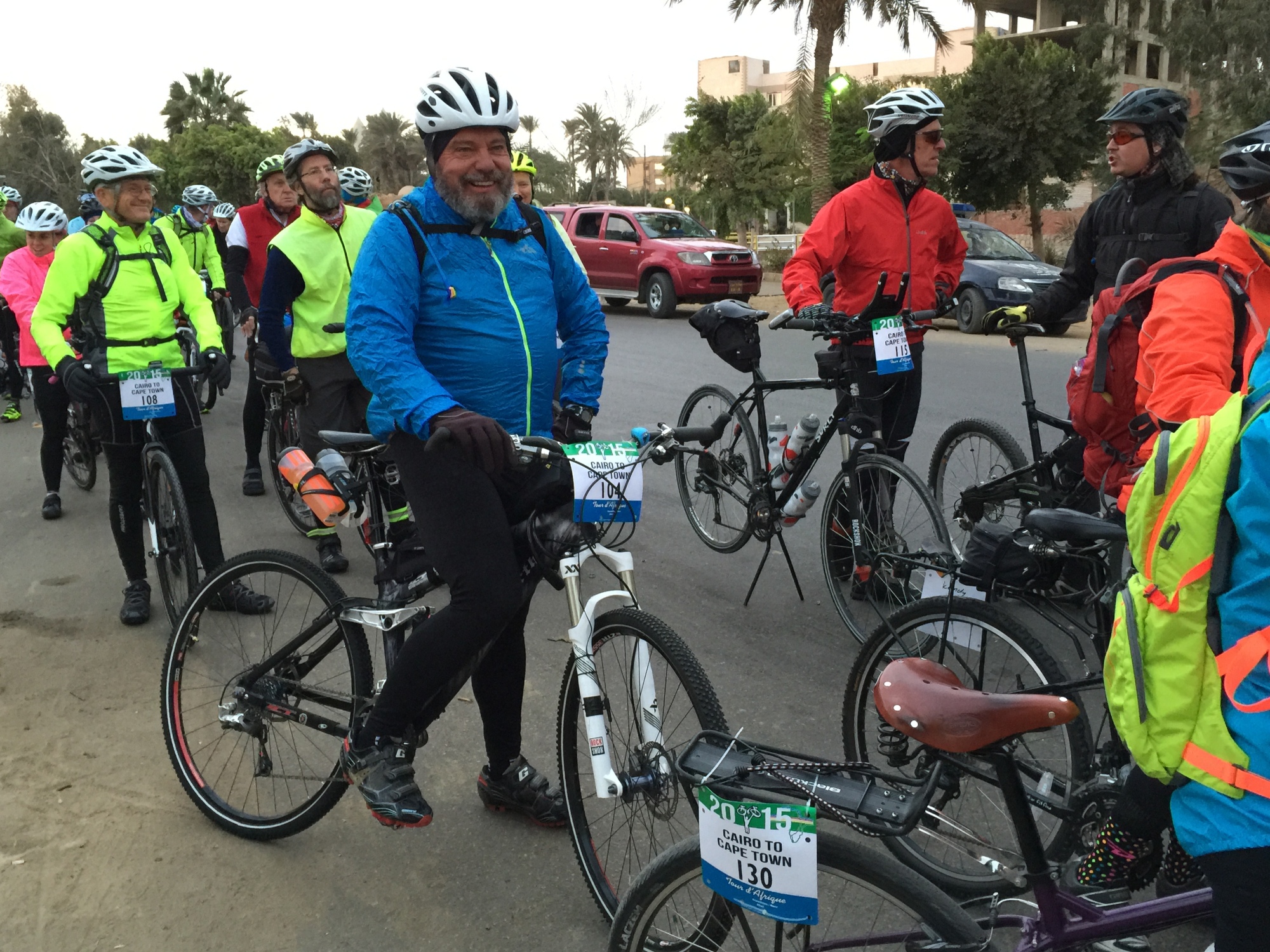 They’re off. The tour left the hotel this morning just before 07.00.

It was an impressive convoy with heavily armed and black garbed security police on the back of a landrover out ahead, followed by two of the smaller Tour trucks, then the riders, and at the back, the big truck with the luggage, dinner kitchen and space for bikes and riders who elect not to cycle a stage.  It made quite a spectacle.

There is an 11km ride to the pyramids for the official timed start of the first 129 km stage. It’s an easy stage – straight paved road, wind seems to have died down and is mostly from the west, and the temperature feels a little less freezing. I hope it will be nothing more than a day to stretch out, get the feel of the bikes, check that everything attached to them is secure and in the right place, and then to have a first night erecting and sleeping in the tents.

The young girl from the Yukon in northern Canada camps all the time; an Englishwoman tours the breadth of Europe with tent and everything else she needs in panniers on her bike; others have put their tents up once… Andy and I, (along with my two dogs who absolutely love camping!) have slept out in his tent a couple of nights. It’s easy and quick to put up, big and comfortable enough to live in.

But for four months…in desert and bush camps, in cold, wind and maybe rain, tired or even exhausted after a day’s riding and in camps where sometimes the only  water will be the tanks on the truck, just enough for cooking and drinking…

I’m sure many of the riders felt like Andy did this morning; excited and impatient to get on the road, and with some trepidation for what lies ahead. One of the problems is that no-one exactly knows what does lie ahead on a ride like this! One of the guidelines is to expect the unexpected.

There are about 8-10 staff; cooks and drivers, route planners and logistics, a bike mechanic, medic, race director and assistants, and Sharita, a cool South African in overall charge of the Tour who has done the trip 7 times before and exudes calm confidence. Several staff (and some riders) have done the full trip or parts of it previously. The quality of the Tour people, their cycling and travelling experience, and their organisational competence is very reassuring. As Sharita said in the final briefing, ‘We’ll have good days, and so will you. But there could be days when nothing will go smoothly…’ and she smiled…