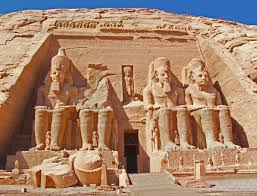 I wus there! Looking good; happy, strong (and  slimmer too?)

But he went on…

‘Hell of a ride today – in two halves. The first 80 kms were close to sheer riding pleasure; downhill, wind from behind, perfect. The second 75 kms were horrible, ghastly, brutal uphill, wind right in our faces, hot, and of some bother.’

But it all came to a happy end once they’d checked into a hotel by Lake Nasser – even though the check in, for some reason, took one and a half hours. Today, Tuesday, is a rest day with time for sightseeing.

Not only are the two temples at Abu Simbel among the most magnificent monuments in the world but their removal and reconstruction was an historic event in itself. When the temples (280 km from Aswan) were threatened by submersion in Lake Nasser, due to the construction of the High Dam, the Egyptian Government secured the support of UNESCO and launched a world wide appeal. During the salvage operation which began in 1964 and continued until 1968, the two temples were dismantled and raised over 60 meters up the sandstone cliff where they had been built more than 3,000 years before. Here they were reassembled, in the exact same relationship to each other and the sun, and covered with an artificial mountain.

2 thoughts on “150 Kms from desert camp to Abu Simbel”