The ride reached Gondar today. Andy was out of touch for a couple of days as they crossed from Sudan into Ethiopia but he’s now got a local SIM and we had a long conversation this evening. He sounds strong, clear, relaxed…

with a rather different view of this ride.

One of my longtime friends says ‘Chararcter building sucks!’ and the roads of Sudan and Ethiopia turned out to be at the very least, character building even for the strongest and most experienced of the riders.

It was a combination of things. The heat, around 49.5-50.5 in the middle of the day; the road, unpaved and rough; the climb, over 2 000m; the harsh terrain without shade; and assorted broken bikes and tummy upsets. 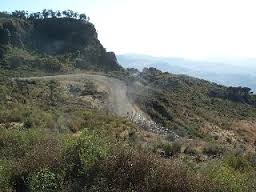 Andy was right: he’s not that pig headed. He did the smart thing and got on the truck. He sounds more relaxed than I’ve heard him since I was with him in Cairo; like he’s started to see this as a ride, not a mission. It’s OK if he enjoys it, rides some days, rests some days, makes friends, notices the scenery. I realised he hadn’t said much about the magnificent views on the way up the gorge this week…

The group has two days in Gondar, two days riding to Bahir Dar and another rest day, before five days ride into Addis.

9 sleeps and I’ll be there! The hotel where we’re booked enquired whether we needed transfers from the airport. I wrote back saying that I would, but that my partner was riding on the Tour and ‘would make his own way to the hotel. You will recognise him by his grimy sunburned appearance and state of exhaustion’.

The reservations clerk replied very professionally that he had ‘noted my comments…and looked forward to welcoming us’. I assume that means they’ll recognise Andy as a paying customer and won’t turn him away at the door!